When the multiple leaf option is used the canopy cover of the plant has to be defined in order to estimate the partitioning of intercepted radiation between plants (see chapter “Soil evaporation, snow and radiation processes” for details on the radiation interception). The canopy surface cover is calculated as:

where pcmax is a parameter that determines the maximum surface cover and pck is a parameter the governs the speed at which the maximum surface cover is reached. Al is the leaf area index of the plant. Note that pcmax can also be set to values greater than unity if the horizontal extension of the plant is larger than the soil. This is the case when a plant stands on a smaller area of soil than what it receives light from, e.g. a plant growing in a pot (described in detail below).

A horizontal positioning of plants in one dimension within the unit area of soil is defined in order to represent different degrees of shading between plants. The horizontal position of a plant j is defined by its canopy surface cover fcc,j and its mid-position xj (Figure 3.2). The mid-position of a plant xj can be given as a fixed parameter or may be altered randomly each time step using the parameter xx to initialise the randomiser (see switch SpatialDistribution random vs. parameters). Consequently it is possible to have two canopies covering the same area of soil and these plants will therefore compete for radiation, as described in “Soil evaporation, snow and radiation processes”.

Figure 3.2. Conceptual view of the spatial distribution of multiple canopies in one horizontal dimension, given as a function of the central position, xj, and the fractional canopy cover, fcc,j, of each canopy. pcmax is the maximum horizontal canopy surface cover for each plant. 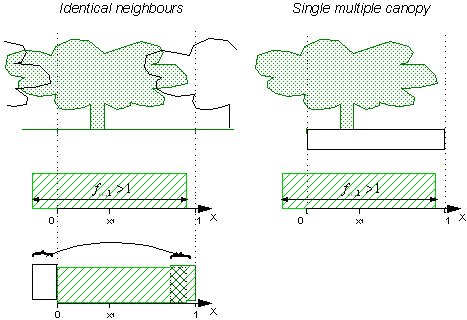 When using a single leaf the canopy surface cover is assumed to be equal to unity, i.e. completely covering the soil surface.