Thermal conductivity is a complex function of soil solids and soil moisture. Since the soil often consists of a top humus layer and deeper mineral soil horizons, the conductivity will vary with depth even if the soil moisture is constant thoughout the soil profile. If the organic top layer does not have the same thickness as the upper soil compartment, special calculations of the upper boundary condition have to be made (see Mixed composition of top layer).

For humus, i.e., organic matter, the thermal conductivity function is adapted from a figure in de Vries (1975):

For unfrozen mineral soil an empirical conductivity function is adapted from Kersten (1949):

where a1, a2 and a3 are parameters and ρs is the dry bulk soil density (see Figure 1.2). The logarithmic argument, θ/ρs, is equivalent to the soil water content by weight. See viewing functions Unfrozen Clay-type Soil and Unfrozen Sand-type Soil.

The thermal conductivity for both the mineral and the organic soils can be scaled with a scaling factor, xhf. 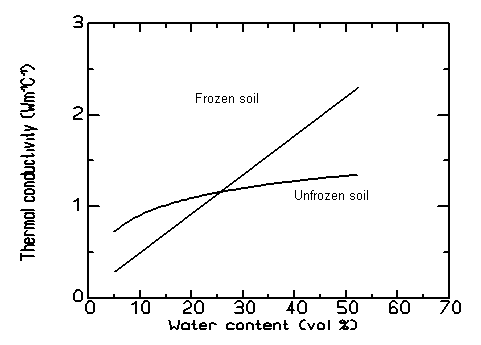 Figure 1.2          Thermal conductivity. Kersten’s equations, originally given for water content in per­cent by weight, are here recalculated to volumetric basis for a specific soil.