Common to both approaches is the partitioning of net radiation between the plant canopy and the soil surface assuming the Beer’s law to be valid (Impens & Lemeur, 1969):

The energy fluxes and resistances in the soil-plant-atmosphere system are illustrated below (see Figure 4.1). The net radiation above the plant canopy, Rn,tot, is partly intercepted by the canopy according to Beer’s law described above. The remaining radiation at the soil surface, Rns, is balanced against latent heat flux to the air, LvEs, sensible heat flux to the air, Hs, and the heat flux to the soil, qh. The soil evaporation, Es, is thus estimated from the latent heat flux, LvEs, (i.e. the energy used for evaporating water from the surface). Several resistances act on the fluxes of energy e.g. soil surface resistance, rss, canopy resistance, rs, aerodynamic resistance above the canopy, ra and the aerodynamic resistance from the soil to the reference height above the canopy, ras. 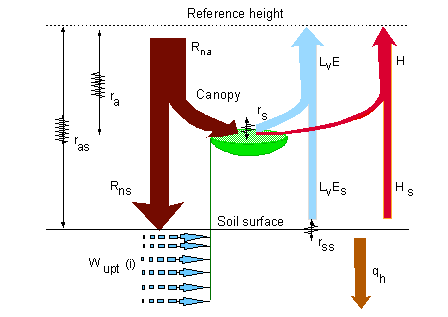 Figure 4.1. The energy flows and resistances at and above the canopy and soil surfaces. Rna is the same as Rn,tot